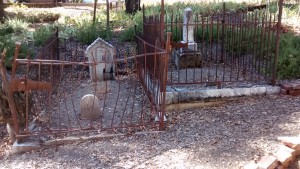 cemetery lies, almost unnoticed, upslope from the Imperial Hotel, along Church Street. The first burial in this cemetery was in 1851 when a young man, Charles C. Wheeler, died not long after the quartz miners came and founded the village. The last burial was in 1892 when Mary Gundry, wife of the Justice of the Peace, joined her sons. In those 40 years the cemetery interred 20 persons for certain and possibly 8 or more.[1] Many buried were killed in mining accidents. One of these was Oliver Vance (1848-1880). He died when he was crushed by a skip (elevator to access the mine) in Amador City’s most famous mine, the Keystone Mine. Vance left behind a wife and five children, who received death benefits from the Ancient Order of United Workmen, one of many benevolent societies supplying an early form of life insurance.

The people buried here were predominately Protestant or Methodist and probably members of the nearby Methodist church, then located at the corner of Church Street and O’Neil Alley. There was never a Catholic Cemetery in Amador City. The land presented problems for burial and survival of the grave markers. Rocky ground made digging graves nearly impossible, so frequently dynamite had to be used to open a new grave. Before the curb and fence were erected around the cemetery in approximately 1915, soil washed down to Church Street, causing dirt to partially cover some of the headstones in the northwest section of the cemetery. Some graves were never marked or given hand-carved wooden markers that did not survive the ravages of time. During the 1950s, the person hired by the city to clean    up the cemetery decided to burn the vegetation to quickly do the job, and the remaining wooden markers were unfortunately lost. Many of the surviving marble headstones have plaques with interesting historical information about the deceased and clues to Amador City’s historic mining past.