The Fleehart Building is the 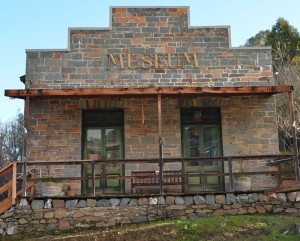 oldest intact commercial building in Amador City, dating from the 1860s or possibly earlier.  It was most likely an early Keystone Mining Company store, also known as Kirkland’s, and the only store to survive Amador City’s great fire of 1878.

William Fleehart was an early day mine owner, merchant, and Wells Fargo agent. Through the years the building has housed many types of businesses including Fleehart’s Wells Fargo office.  The building was purchased in 1983 by Jerrold Whitney, an antique dealer, and Clayton Pinkerton, a well-known Bay Area artist.  They bequeathed the building to the City to be used as a museum.  In 1993 it acquired its current name and took as its focus the role of women and the part they played in settling the West.

Early migrants to the gold fields were mostly men.  But the wild, rough-and-tumble gold mining way of living gradually gave way to family life.  Schools were established, hiring mostly women as teachers.  Girls and boys could now enroll in school rather than being educated at home.  A post office was organized and stores, homes and churches—Catholic and Methodist—were constructed.   The fabric of an established town was woven by the women, while the men mined the gold.

The women came west in covered-wagon trains.  A highlight of the Amador Whitney Museum is a well-documented depiction of the various routes they followed across the continent, gleaned from diaries many of them kept.  Exhibits focus on the family and community life that women brought to the Gold Rush: replicas of a one-room schoolhouse, a boarding house, a mine shaft, and a 19th-century office.  The original safe belonging to the City and two early ballot boxes for city elections are housed here, along with the desk belonging to John McWayne’s grandfather when he was head of the Wells Fargo freight office.  Photographs throughout the museum depict Amador City’s early days.  Exhibits from the old post office are in place with names of past and present residents or their descendants still listed on many of the boxes.

Also on display are pieces of the vast collection of contemporary original art by Clayton Pinkerton that was donated to the museum, along with the building, upon his death.  The artwork is available for purchase or to enjoy.