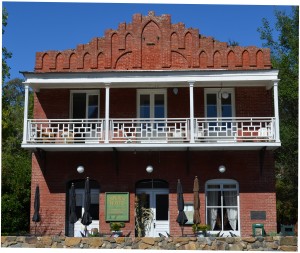 When the Imperial Hotel first opened its doors in 1879, Amador City was a bustling mining town in the midst of rebuilding after a devastating fire the year before and a previous fire in 1876. The Sanguinetti family wisely built their new two-story hotel using fireproof brick and stone. It was first named the Italian Hotel, later renamed the Imperial, and served prosperous Victorian visitors and successful miners. It started life as a boarding house with ground floor dining room and bar. The dining room had a separate entrance so the ladies would not have to walk through the bar to reach the dining room. Lodging was upstairs and also in a wood-frame addition in the rear of the building which was removed in later years.

The hotel closed in 1927 and did not reopen until 1988. Today the miners are gone, but Amador City retains is historic character, and the beautifully restored Imperial Hotel still offers a warm and gracious welcome to visitors to the Gold Country. Present day owners, Mary Ann and Jim McCamant, have added contemporary art, colorful fabrics, and an assortment of antiques throughout the high-ceilinged interior. Their restoration retains the original brick exterior with its iron doors and shutters. Inside, the dining room has exposed original brick walls and offers a varied menu of Mediterranean-style fare and mostly local wines. The bar has been completely restored with antique barstools, original gaslights, a 19th-century-style wood bar and creaky floors. Fountains, waterfalls, flower gardens and century-old walls of native stone highlight the new courtyard.

Today the Imperial has six air-conditioned guest rooms located on the second floor of the original 1879 building. The rooms have high ceilings, the original brick walls, and large operable windows overlooking the town. There are two sets of adjoining rooms: rooms 3 and 5, and rooms 2 and 4. As for Room 6, according to the Gold Rush Ghosts organization, it’s haunted. Look for the Certificate of Authentication hanging on a lobby wall – and watch for The Lady in White on your visit upstairs. Some of the rooms will be open for Home Tour visitors during limited hours.