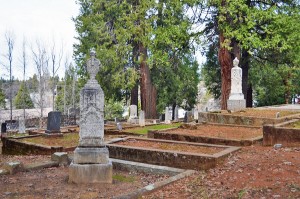 In the early 1850s there were a number of small mining communities located near Pine Grove, including Irishtown, Aqueduct City, Clinton, and New York Ranch. However, only a saw mill existed where the roads from Volcano, Clinton, and Sutter Creek intersected. But the crossroads eventually proved lucrative for those who realized the potential for commerce along busy byways. A village nestled under the pine trees soon sprang up and with the death in 1860 of Luther S. Elliott, a miner from Missouri, the little Pine Grove cemetery was fashioned. Although most of the surrounding communities shrank into obscurity, the Village of Pine Grove survived and its cemetery became the final resting place for many of the region’s earliest pioneers.

Come with us now to celebrate their rich, unique lives: families who came and settled, the farmers and ranchers, ditch tenders and miners, influential businessmen, and those who let the bottle rule. Hear about brave women of Pine Grove: a widowed postmistress who traveled twice across country by covered wagon, an elderly mother who buried most of her children, the school teacher and the way station keeper. Learn about the tragedies that befell those who worked in the mines, logged the forests, and kept the water flowing through Amador’s canals. Meet a famous World War II general, a Klondike gold seeker buried at sea, the lay minister shot by Indians, and a crazy man who terrorized the town. There were those who died by accident and those whose deaths were not by accident at all. Most importantly, there were those who lived their lives well, contributing much to their wonderful community! Please come and let us introduce you.

The Amador County Cemetery Board