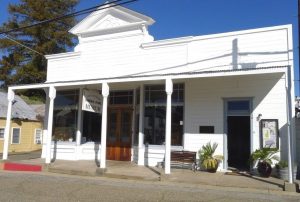 John Monteverde, a native of Genoa, Italy, and his son John opened the store on Randolph Street in August of 1896. They carried hardware, groceries, wines, liquors, boots, shoes and everything necessary for residents and miners. Dry goods, bulk products, apparel, patterns, even penny candy were on hand for local shoppers.  Over its counters and from the shed (now the Amador Arts Gallery), the Monteverde family sold all sorts of merchandise through the years until the store closed unexpectedly in 1971. The window contained a handwritten sign stating, “This store will be closed for a few days,” but the store never reopened.

This is an example of a perfectly preserved general store from the mid-1800s.  It still displays all the paraphernalia of the past on its shelves, including mason jars containing food of unknown origin.  Brown paper bags and rolls of wrapping paper are still in place as is an intricately carved and highly polished oak icebox.  This emporium also served as a meeting place for the housewives of the period.  The existing old ledgers, written in spidery script, attest to the ups and downs of the citizens of Sutter Creek.

Rose Monteverde, the last of the storeowners, willed the structure to the City of Sutter Creek when she died in 1978, specifying that it be converted to a library or museum.  The city reopened it in 1992 as a museum and piece of living history. The store’s shed was rebuilt and enclosed for use as an office. In here, the walls are decorated with an amazing mural, covering the entire room, depicting the history of Sutter Creek. In 2000, local artist Rand Huggett designed and painted this mural with historical details supplied by historian Larry Cenotto. This mural and the store are opened by dedicated volunteers for the Home Tour.