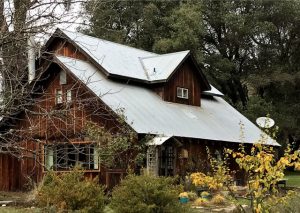 In 1957, Alice Kaiser’s family moved to the property where her bed and breakfast and farm are now located.  They called the land The Meadows and used it mostly for pasture for their animals and some gardening as there were no structures.  When she inherited the ten acres, Alice and her young son moved there in the late 1980s and lived in a trailer while she built the house. In the late 1990s, she employed a contractor to add the upstairs, which comprises the B&B guestrooms and bath.  At the completion, the house contained 1,400 square feet and was named Casa de la Pradera, Home in the Meadow.

The rustic exterior of the two-gabled house is unpainted board and batten with a metal roof.  The front door opens directly into a space that serves a variety of functions: kitchen, sitting room, dining area, and workspace. This room is painted a pale yellow and the woodwork here and throughout the house is white.  The floors on this level are laid with Saltillo tiles from Mexico, which Alice installed herself. Most of the furnishings began life elsewhere as  Alice enjoys finding things that can be adapted to her home.

Off the main room are a pantry and Alice’s quarters consisting of her bedroom, bath and office.  The B&B is located on the second floor.  Opened in 1998, there are two bedrooms with a bath in between.  The rooms are cozy and feature a wide selection of book and space for relaxing and reading those books.

At the time of the tour, several crops and flowers will be seen.  All around the property are oaks and pines along with the many fruit trees.   All the farm produce is organic.  Each year, Alice sends out a list to her customers stating what she has to offer.  People come to the blue packing shed to pick up orders.   Alice is also part of a year-round Community Market which meets most Tuesdays and Saturdays behind Teresa’s Restaurant in Jackson.